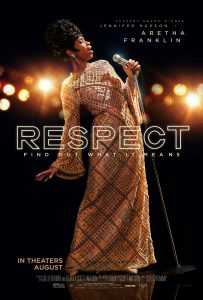 When telling the life story of an iconic and complicated figure like Aretha Franklin, it can be difficult to get everything right. Decisions regarding what should and shouldn’t be included can be fraught with difficult choices, some of which will undoubtedly disappoint while others will be perfectly spot-on. Considerations like these almost assuredly had to have gone into the process of devising the narrative and screenplay for the biopic of this storied entertainer and activist, the result of which has drawn decidedly mixed reactions. For my money, however, director Liesl Tommy’s debut feature mostly gets it right, especially in the outstanding Oscar-worthy lead performance of Jennifer Hudson, the supporting portrayal of Skye Dakota Turner as Aretha’s younger self and the dazzling musical numbers, all of which are absolute knock-outs. Admittedly the film is somewhat formulaic (some might say predictable or even trite in certain sequences) and a bit overlong in its attempt to capture as much of Ms. Franklin’s life story as possible. Nevertheless, in the greater scheme of things, “Respect” is a capably made, exceedingly entertaining offering that’s far from deserving of most of the petty sniping that’s been directed its way. Doing justice to the Queen of Soul is a daunting prospect, to be sure, but I find it difficult to believe that she would be disappointed by the results.