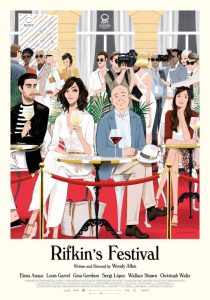 Watching writer-director Woody Allen’s latest is indeed a somewhat frustrating exercise, given that the prolific auteur gets many things right and a number of other elements decidedly wrong. When an aging, neurotic, overly intellectual former professor and wannabe novelist attends Spain’s San Sebastian Film Festival with his successful publicist wife, the lonely protagonist is left with a lot of time on his hands while she’s busy working. It gives him ample opportunity to contemplate the choices he’s made, life’s big questions and what lies ahead as the clock winds down. Having not attained the kind of career acclaim that he would have liked to achieve, he’s reminded of his failings, especially when surrounded by so many others (particularly those of a junior age), including his more youthful spouse, whom he suspects is now falling for one of her clients, a handsome young French filmmaker. As the beleaguered protagonist seeks to work out his various issues, he has a series of dreams reminiscent of some of his favorite classic films (mostly foreign releases) featuring scenarios in which those pictures’ characters are replaced by him, his wife and her client, as well as a new romantic prospect he has his eye on. The dream sequences, gorgeously filmed in black and white, present send-ups of the works of such famed directors as Federico Fellini, Luis Buñuel, Jean-Luc Godard, Orson Welles and Ingmar Bergman, including a hilarious parody of the famous chess match from “The Seventh Seal” (1957) featuring Christophe Waltz as the Grim Reaper. While the issues addressed in the film generally represent ground that Allen has already covered many times before, he nevertheless infuses them with copious humor and new spins that haven’t been tried before. The same can be said for some of the situations embedded in the narrative, which feature circumstances and themes not unlike those previously presented in such films as “Stardust Memories” (1980) and “Vicky Cristina Barcelona” (2008), but with funny new takes. And, to the film’s credit, the fine cinematography and excellent ensemble cast with its eclectic mix of American and European performers carry the production well. However, in addition to the repetition of previously employed plot and script elements, I must also say that I was disappointed by the casting of character actor Wallace Shawn in the lead role. In many of Allen’s recent works, he has cast surrogates to play the roles he used to take on, and some of those choices have worked out well – but not here. While Shawn may be fine for small supporting performances, he doesn’t have what it takes to play a lead, especially one that’s cut from a cloth as readily recognizable as the one from which Allen’s signature portrayals have emerged in so many movies over the years. The overall result here, then, is a breezy, enjoyable offering with more genuinely solid laughs than we’ve seen from the director in many years, even if it’s not quite up to par with some of his other more recent successes, such as “Midnight in Paris” (2011) and “Blue Jasmine” (2013), as well as the many, many other fine releases from his career’s heyday. In light of that, many reviewers have stated that they’d like to hope Allen still has a masterpiece or two left in the tank but that this, unfortunately, isn’t one of them. Nevertheless, compared to such other recent disasters as “A Rainy Day in New York” (2019), “Wonder Wheel” (2017), “Café Society” (2016) and “To Rome With Love” (2012), this is at least a step in the right direction.