Skip to content
Home/‘Roadrunner: A Film About Anthony Bourdain’

‘Roadrunner: A Film About Anthony Bourdain’ 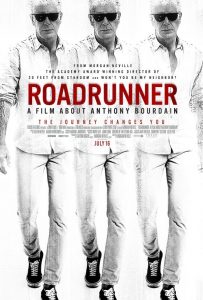 “Roadrunner: A Film About Anthony Bourdain”

After screening this portrait of enigmatic chef/writer/storyteller Anthony Bourdain, I came away sincerely convinced that I had watched a biography about a troubled, multifaceted talent, but I didn’t feel as though I knew the protagonist any better than I did going in. That’s particularly true when it comes to understanding what led to his seemingly impulsive, inexplicable suicide in 2018, a question that basically remains unanswered. To a great degree, these shortcomings are probably attributable to director Morgan Neville’s ambitious, though nevertheless insufficient, ability to get a grasp on the picture’s expansive subject matter and mold it into a coherent finished form, an aim that’s perhaps fundamentally impossible to attain given the diverse nature of Bourdain’s life, character and work. Consequently, viewers are essentially left with a somewhat overlong, encyclopedic recitation of the protagonist’s accomplishments and life events, one that’s depicted through footage of an array of colorful incidents drawn from a wealth of archive material, punctuated by insightful interviews with those who knew and worked with him. But, while that may make for some visually intriguing eye candy with modest smatterings of heartfelt moments, it fails to coalesce into the kind of cogently organized narrative characteristic of some of the filmmaker’s other works, such as “20 Feet from Stardom” (2013) and “Won’t You Be My Neighbor?” (2018). Bourdain was an innately complex individual, but, simply by virtue of that, it may not be realistic to believe that the essence of someone with such a complicated persona can be sufficiently captured and depicted on screen. And any efforts that come up short of that, regrettably, just don’t do the principal justice.