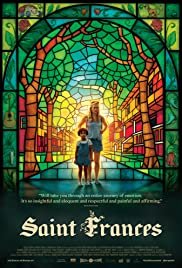 While this offering deserves praise for its courageous willingness to tackle difficult, taboo topics, it fails on virtually every other count. This story of a nanny who dislikes children (an implausible notion in itself) who takes a job watching the kids of a lesbian couple experiencing marital difficulties draws from a narrative that’s all over the map, with story threads that go unresolved or under-explored. Writer Kelly O’Sullivan’s inconsistent, often-wildly contradictory character development frequently leaves viewers scratching their heads, a problem compounded by the fact that many of the characters (especially the protagonist) are myopic, irresponsible, self-serving individuals. It’s understandable that finding one’s way in life often involves changes of mind and heart, but it’s so pervasive here that it verges on rampant, indecisive cluelessness, coupled with outright selfish, mean attitudes toward others, behaviors that no one should have to be subjected to (even if they routinely and inexplicably turn on a dime every five minutes). Other than its frankness in dealing with issues seldom addressed (in rather graphic and sometimes gratuitous detail, I might add), I’m truly mystified to understand what so many critics see in this debut feature from director Alex Thompson.