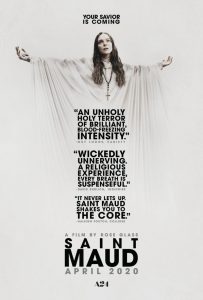 As an atmospheric psycho-spiritual thriller, writer-director Rose Glass’s debut feature ambitiously attempts to tell a chilling cautionary tale about the dangers of religion run amok as seen through the mind of a pious yet troubled palliative care nurse. After a carefully constructed opening act, however, the film never seems quite sure where it wants to go from there, flailing about in a sea of exotic imagery and left-field plot developments that don’t quite mesh. Fine performances by Morfydd Clark and Jennifer Ehle, along with superb cinematography, intriguing (though underdeveloped) references to the theology of William Blake, and a menacingly ominous soundtrack, make for intriguing and visually dazzling (albeit sometimes puzzling) viewing, although that combination never quite culminates in the payoff that its buildup seems to promise. In the end, the gravity of the material here would appear to be beyond the grasp of a first-time feature filmmaker, despite the potential revealed in a number of aspects of the production. Better luck next time out.