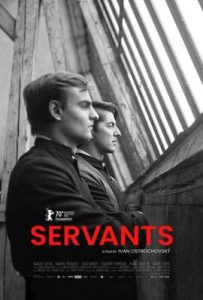 Chilling and thoughtful, director Ivan Ostrochovsky’s second narrative feature spins an edge-of-your-seat tale while simultaneously delivering an insightful meditation on what it means “to serve,” as well as presenting a workshop on outstanding camera work. Set in 1980 totalitarian Czechoslovakia, the film follows the gripping struggle of a group of students and administrators in a Bratislava seminary who are being pressured to cooperate with a Catholic organization that has agreed to side with Communist Party dictates to prevent the circulation of “subversive” ideas, all the while wrestling with their own hearts about doing what is morally and spiritually correct. Failure to go along with these requirements could result in seminarians being expelled and drafted into the military or, even worse, the permanent closure of the facility. This high-stakes morality play is a tale told in the shadows, one perfectly suited to the picture’s magnificent black-and-white cinematography, which alone is worth the price of admission. The eloquent framing of each shot and the filmmaker’s masterful execution of the picture’s mise-en-scène element are among the finest I have ever witnessed, and they enhance the storytelling by skillfully embellishing the actions playing out on screen. Some may find the pacing somewhat sluggish, but this deliberately employed tactic significantly adds to the slowly simmering narrative, upping the tension as events unfold. What I most liked about this offering, however, is the deft handling of the themes that underlie the principal storyline, adding a level of depth that takes the film to an entirely different level. It’s unfortunate that “Servants” has not received wider play or recognition than it has thus far, but, now that it’s available for streaming online, here’s hoping it garners the attention it genuinely deserves.