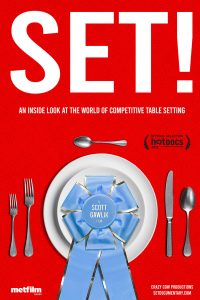 Were it not for this film, one might think its eccentric subject matter was something featured in The New Yorker or on a CBS Sunday Morning segment, if not an outright fabrication. However, director Scott Gawlik’s tongue-in-cheek documentary chronicles the polite but cut-throat world of competitive table setting as seen through the eyes of a number of entrants in California’s Orange County Fair contest. As daffy and offbeat as all of this may seem, it’s a deadly serious undertaking for this determined band of wannabe Martha Stewarts, who’ll generally go to great lengths in terms of time, money and effort to take home their prized ribbons. In telling the individual stories of these contestants, the film explores the diverse outlooks with which they approach the competition, as well as their various personal motivations for participating in something many of us might find trivial, inconsequential and fraught with nitpicking rules of what’s considered proper table etiquette. However, when viewers see the artistry involved in these settings, as well as the pride their creators take in their design and assembly, it’s apparent this is an art form all its own, if a bit esoteric and quirky and, at times, astonishingly thought-provoking. Like the table presentations themselves, the film showcases its material in meticulous detail, perhaps even more so than what many viewers may want to know, making for an offering that arguably goes on a little longer than expected or desired. But this offering nevertheless introduces us to a world many of us have probably never seen or even been aware of, and it does so with a delightfully cheeky, wry sense of humor and ample place setting eye candy. Bon appétit!