‘Shall I Compare You to a Summer’s Day?’ (‘Bashtaalak sa’at’) 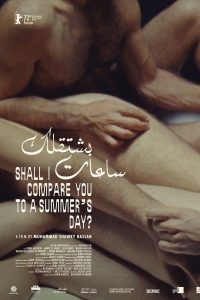 “Shall I Compare You to a Summer’s Day?” (“Bashtaalak sa’at”)

I’ll say it up front – writer-director Mohammad Skawky Hassan’s debut feature is definitely not everyone’s cup of tea, but that’s not to suggest it’s without merit. This experimental piece presents viewers with a sonnet to the nature of gay male love, relationships and eroticism in all their myriad forms. The film’s artistic, nonlinear narrative incorporates a combination of live action, animation and music video-style sequences, along with more than its share of sexually explicit sequences (sensitive viewers beware). It combines elements from a series of stories drawn from the filmmaker’s diary, creating a montage of images and poetic anecdotes styled after an array of classic works drawing from such influences as Shakespeare and Scheherazade. It’s also a truly bold gay-themed work to emerge from Middle Eastern culture, an accomplishment to be praised for its audacity. The result is an intriguing mix of artistry, eye candy and camp, though the lack of a more unified narrative can be a tad frustrating, especially among those expecting a more conventional storytelling approach. Perhaps the best way to enjoy this one is to simply sit back and let this one wash over you and not try to over-analyze it.