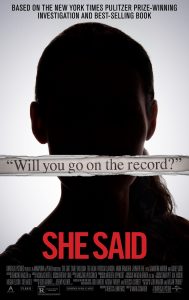 Movies about journalism can be somewhat problematic (especially these days in this age of growing media mistrust). Which is why these films really and truly work best when they play it straight, focusing on the facts in a no-nonsense, straightforward way, with no grandstanding or exaggerated histrionics, and that’s one of the innate strengths of this latest offering in this genre. Based on the Pulitzer Prize-winning New York Times investigation and best-selling book of the same name, “She Said” provides a fact-based recounting of the efforts of reporters Megan Twohey (Carey Mulligan) and Jodi Kantor (Zoe Kazan) to uncover and document the blistering sexual misconduct allegations leveled against high-powered Hollywood producer Harvey Weinstein. The duo’s reporting helped lead to Weinstein’s eventual conviction and the launching of the #MeToo movement aimed at exposing a clandestine culture of sexual abuse against women throughout the entertainment industry and beyond. And, as a onetime-practicing journalist myself, I appreciate the unencumbered approach the filmmaker has employed here. However, just because the film takes a rather direct approach in telling its story, that doesn’t mean it’s without its compelling moments of emotional heft, particularly in the testimony of the victims, including some, like actress Ashley Judd, who appear in the film playing themselves. Director Maria Schrader may not draw upon anything overly inventive here, and the film is admittedly a tad too long, but it nevertheless chronicles the reporting process clearly, concisely and unburdened by technical jargon or gaps in explaining the legal and journalistic consequences involved. It also features a fine ensemble cast, most notably Mulligan (in one of her finest performances) and Jennifer Ehle and Samantha Morton in significant supporting roles. While some have called this work “pedestrian” and “plodding,” I respectfully disagree with those characterizations and would readily put it alongside works like “All the President’s Men” (1976) and “Spotlight” (2015), movies that detractors of this picture have contended are far superior when, in fact, they’re all mostly on par. This offering genuinely deserves a fair shake, something it’s regrettably not getting to the degree it deserves (thanks to its often-unfair torpedoing by cynical critics and misogynist trolls). It brings to life an important story that was long in the offing and that has, thankfully, had a lasting, deep, culture-shifting impact.