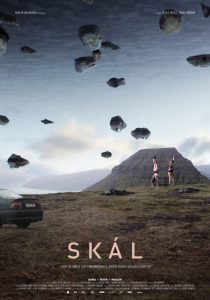 Though billed as a documentary, this captivating release plays more like a docu-drama or even a big screen version of reality TV. The film tells a modern-day Romeo and Juliet story of sorts about Dania, a young, idea-filled poet from a conservative Christian community who falls for an outspoken, outlandish rap artist, Trygvi, whose shock-provoking lyrics are the antithesis of the values his once-sheltered girlfriend was raised with. Despite their differences and the pressure inflicted upon them through less-than-subtle parental misgivings, the couple steadily grows ever closer, especially as Dania becomes more comfortable in poetically expressing her conflicted feelings about genuine faith and the pitfalls of needlessly restrictive religious conventions. Directors Cecilie Debell and Maria Tórgarð thus present an honest love story with deep spiritual implications, narrative elements often lacking in similar offerings. The film’s truly breathtaking cinematography is a sight to behold, showing off the beauty of the Faroe Islands in ways seldom seen, combined with heartfelt, intimate depictions of personal moments, making for an unusual blend seldom seen in many movies, let alone those in the documentary genre. My only problem with this release is that so many of the most significant moments seem so perfectly captured that it almost makes me wonder about the validity of their authenticity, that they play more like scripted material than spontaneously caught events. That aside, though, this thoughtful, insightful release provides viewers with much to ponder, backed by gorgeous images and presented through a bevy of touching moments. What more could audiences ask for?