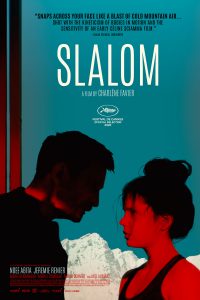 When a high-strung, emotionally abusive trainer inappropriately seduces a 15-year-old skiing prodigy, the aim of grooming an aspiring champion becomes unexpectedly complicated for the young athlete as she struggles to sort out her feelings and priorities. As a vehicle for addressing an important social issue (especially in the sports world), “Slalom” hits all the right notes (albeit somewhat predictably at times), and it conveys its message in a release with fine acting, excellent skiing footage and beautiful cinematography of the French Alps. However, the film begins running out of steam (and direction) in the final act, with “nuance” being euphemistically passed off as a lack of defined focus. Director Charlène Favier shows much promise as an emerging filmmaker in this debut narrative feature, though, based on this work, it’s apparent some refinement is in order for future projects.