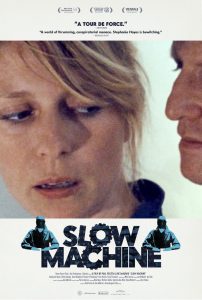 Experimentalism in cinema is certainly laudable, but, at some point, a project needs to adopt some kind of focus to effectively maintain viewer interest. And the stumbling attempts at doing so in this indie comedy/psychological thriller unfortunately keep this effort from successfully living up to its potential. Inspired by films of the low-budget mumblecore genre, directors Joe Denardo and Paul Felten tell a somewhat fractured tale of a paranoid experimental theater actress and her tension-filled involvement with a New York counter-intelligence operative with questionable credentials, a relationship that results in calamity and her need to hide out in a suburban safe house with a group of hapless musicians. While this offering is amply peppered with offbeat humor, a series of insightful monologues and dialogues, an edgy atmospheric feel, and a thoughtful meditation on matters of paranoia and mortality, the picture regrettably goes off on a number of pointless tangents and tells its story with a skewed, sometimes-fuzzy timeline. In many ways, it feels like all the parts are here; they’re just not assembled as well as they might have been, especially in the final act. Nevertheless, despite these shortcomings, Denardo and Felten would appear to have a promising future once they work out the kinks and refine their craft.