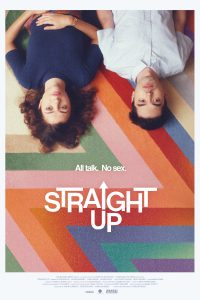 Living our lives as we were meant to is sometimes challenging in unusual ways. So it is for a loquacious, neurotic gay man who’s uncomfortable with what comes with the lifestyle, prompting him to believe that he may be latent heterosexual, a notion that launches him into a dating experiment with a woman who mirrors many of his quirky traits. The question thus becomes, will this relationship work? Such is the premise of writer-actor-director James Sweeney’s modern-day throwback to the rapid-fire screwball comedies of the past. While it’s a little hard to fathom that any real life individual could flawlessly deliver unrehearsed, content-rich, machine gun-paced lines with the ease that these protagonists do, their dialogue is nevertheless smartly peppered with witty, often-hilarious observations (as well as a few one-liners that don’t quite stick their landings), making for generally good fun under highly unexpected situations. The pacing moves so quickly that viewers may be left a little exhausted by film’s end, but, in light of the funny yet thoughtful message this release serves up about being oneself, that’s easily overlooked. A generally inoffensive offering that will definitely tickle one’s funny bone in big ways more than a few times.