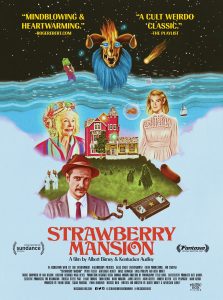 Wow, without a doubt one of the best releases I’ve seen in a long time. This little-known sci-fi gem from directors Kentucker Audley and Albert Birney serves up a funny, thoughtful meditation on the nature of existence, the intrusiveness of attempted mental manipulation and the perils of unbridled greed, all wrapped up in a delightful, visually sensational package. It’s also one of the most romantic stories I’ve screened in ages, conveying genuine, heartfelt emotion without ever becoming schmaltzy, a rare accomplishment in general and something rarely seen in this genre. The film’s scrupulous attention to detail in the production design and writing is absolutely astounding, and its inventive, clever creativity sparkles but without ever becoming exceedingly excessive. There’s a lot to like here, as well as a lot that gives viewers pause for thought. And, aside from a slight tendency to stretch things out a little too long in the final act, there’s really not much else to criticize here. This one may not appeal to everyone, but, for those who value cinematic innovation without becoming tedious, annoying or implausible, this one is for you.