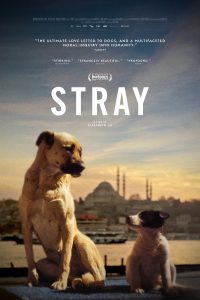 It’s the kind of movie that makes you go “awwwwwwwwwwwwww” about every 30 seconds. However, director Elizabeth Lo’s debut documentary feature about the street dogs of Istanbul – which are legally protected against euthanasia and illicit captivity – diverges from its central narrative a little too much, pursuing tangents that draw attention away from its principal subject. In particular, the film devotes considerable footage to the city’s homeless refugee workers, an attempt to draw parallels between Istanbul’s street people and their canine companions, an intriguing approach that, while interesting, comes across as somewhat unfocused. The film would have fared better if it had sought to do for the city’s street dogs what “Kedi” (2016) did for its feral felines. If you’re looking for a film loaded with loving footage of adorable pooches, “Stray” makes for a nice diversion. However, if you’re searching for groundbreaking documentary filmmaking, this one misses the mark, despite seemingly good intentions.