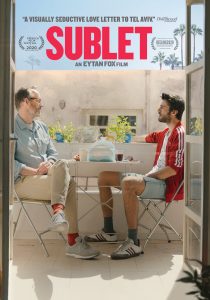 What a shame it is when a film successfully manages to feature fine performances, deliver insightful conversations and evoke heartfelt emotions but still never quite reaches its potential. So it is in this Israeli comedy-drama about an aging gay travel writer from New York who sublets an apartment from a handsome young bisexual film student while on assignment to write a piece aimed at taking the pulse of life in Tel Aviv. Director Eytan Fox’s intergenerational story of friendship, romance, reflecting on the past and the search for the next step in life frequently captivates but primarily as a collection of “moments” that don’t tie together particularly well. In an attempt to pack too much material and too many themes into the film’s scant 89-minute runtime, “Sublet” frequently feels seriously underdeveloped and often rushed to get everything in under the wire. The writing is generally crisp (save for one woefully pathetic, insipidly precious scene in the closing sequence), and the lead performances by John Benjamin Hickey and Niv Nissim are heartfelt and lively, but these assets aren’t enough to elevate this offering to what it could have been. Instead of a full-fledged, well-crafted release we’re left with the travelogue version of the story, sadly shortchanging viewers on what might have been a much more engaging and engrossing tale.