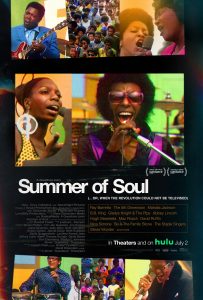 “Summer of Soul (…Or, When the Revolution Could Not Be Televised)”

During the summer of 1969, at the same time as Woodstock, another event took place in New York City of nearly equal magnitude, the Harlem Cultural Festival, a celebration of Black and Latino music, comedy and culture. And, like Woodstock, it, too, was filmed. Unfortunately, after the festival concluded, it was promptly forgotten, the film was stashed away, not to be seen, due to a lack of interest by distributors and television networks to make it public. Fortunately, that footage, which has been preserved in remarkable condition, has been resurrected, and the festival has been brilliantly brought back to life by this entertaining, educational and moving documentary. In this film, director Ahmir-Khalib “Questlove” Thompson has assembled an extraordinary selection of performances by the likes of Stevie Wonder, B.B. King, the Fifth Dimension, Gladys Knight & the Pips, Sly & the Family Stone, David Ruffin, Hugh Masekela, Nina Simone, the Staples Singers and Mahalia Jackson, to name a few. The performances are augmented by commentary from a number of attendees and performers, as well as contributors offering their insights on the festival’s social and cultural impact, including Chris Rock, Jesse Jackson, Al Sharpton, Lin-Manuel Miranda and Charlayne Hunter-Gault. The film is more than just an entertainment vehicle, though; it’s a time capsule into the period, examining the impact that the summer of 1969 had on Black culture, activism and empowerment. Questlove presents viewers with a tribute to the festival and the times, while simultaneously reawakening us to issues that still deserve attention all these many years later, pointedly reminding us that those who do not learn from history are destined to repeat it – and that we had all better be listening to more than just the music.