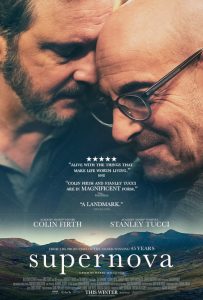 When a long-term gay male couple receives a devastating dementia diagnosis, the partners struggle with how to handle it, one seeking to be a compassionate, supremely supportive caregiver, the other looking not to become an undue burden and pitiable echo of his former self. Admittedly, it’s a somewhat tried and true formula, though it has some new life infused into it here with its same-sex couple protagonists and its gorgeously filmed road trip backdrop. To be sure, the film’s heartwarming and heartbreaking narrative feels a bit too restrained at times and somewhat stretched out in the final act, but it always comes across as sincere and eminently moving. What stands out most, though, are the stellar performances of Colin Firth and Stanley Tucci, who deliver magnificent portrayals and exhibit a remarkable, heartfelt, amazingly genuine chemistry throughout. It’s also refreshing to see a gay-themed film that addresses the kinds of everyday issues that the rest of the world deals with and not just relying on storylines drawn from a handful of familiar subjects that have been endlessly overdone. “Supernova” may not be everything that it could have been, but it certainly is an engaging, heart string-tugging offering that’s well worth the time.