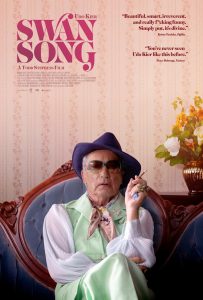 Doing justice cinematically to a real-life icon can be a tricky proposition; sometimes it turns out right, and sometimes it doesn’t. But the thorniest cases seem to be those that are caught somewhere in between, as is apparent in this fact-based memoir about a flamboyant gay Sandusky, OH, hairdresser and make-up artist. When stylist Pat Pitsenbarger is called out of retirement to handle the cosmetology duties for one of his former clients who has recently passed away, he escapes the nursing home where he’s been recovering from a stroke – and not having much of a life. His rascally adventure in the outside world takes him back to the haunts of his old life, where he confronts a number of ghosts from his past and gets a chance to see how much the LGBTQ community has changed since his heydays of running the streets. It’s an experience that’s both fun and melancholic for him, especially given his awareness of the fact that, like his departed patron, his days may be dwindling, too. The execution of his odyssey, however, is somewhat uneven, characterized by a number of superbly handled touching moments and others that feel clumsy and somewhat cryptic. This could be attributable to the filmmaker being too close to the material, or it might be a case of trying to pay proper reverence to a beloved individual but not quite always knowing exactly how. Much of it works, thankfully, due in large part to the excellent lead performance of Independent Spirit Award nominee Udo Kier, but even that fine portrayal isn’t always enough to smooth out the rough patches that unavoidably intrude on the flow of the narrative. Writer-director Todd Stephens serves up a generally sold work here, though some deliberate, nuanced tweaking in spots likely would have taken good material and made it better. Viewers should note that this film is not to be confused with another 2021 release of the same name featuring Mahershala Ali in the lead role (though, intriguingly, both pictures deal with issues of mortality in distinctive and inventive ways). Mr. Pat certainly was a colorful character, but it’s somewhat unfortunate that this offering doesn’t show off all of his hues as well as it might have.