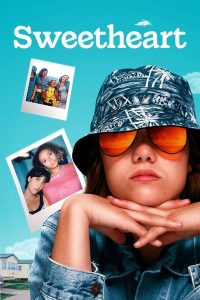 The coming out/coming of age narrative is a tried-and-true formula that has been done many times, but it’s always refreshing when such familiar territory is infused with distinctive characters and crisp writing. And that’s very much the case for the first half of this gay British romcom-melodrama, especially in the wry, incisive voice-over observations of the film’s 17-year-old lesbian lead. When subjected to what she sees as the incessantly lame tedium of a family vacation at a tacky seaside resort, the patronizing protagonist agonizes over everything when not spouting condescending insights or wallowing in exaggerated bouts of adolescent angst. However, when she meets a curvaceous bikini-clad lifeguard who seems to share a mutual attraction, her interest is piqued, enabling her to emerge from her teenage ennui. But no sooner does this relationship begin to blossom when the narrative seems to lose its way, slipping into unfocused meandering and considerable inexplicable brooding. It’s unfortunate that what starts out so promising evaporates so completely, leaving viewers wondering where it’s going and undermining all of the cinematic goodwill it had built up in its first half. Director Marley Morrison’s debut feature reveals a filmmaker with ample potential, but future projects will require some shoring up to live up to that promise.