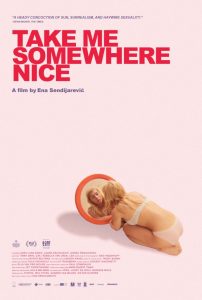 This largely inconsequential road trip tale about a Dutch-born Bosnian adolescent who returns to her homeland to visit her hospitalized father seems to be grasping for something to say but never manages to express what it’s really going for. Director Ena Sendijarevic’s debut feature combines part coming of age story, part quirky comedy, part character study, part misadventure and part heritage discovery set against the backdrop of a land that’s still recovering from the hostility of a conflict that left it angry, fearful and scarred. Unfortunately, that mix doesn’t blend well, especially with its understated approach, uneven pacing, jarring changes in mood, and developments that aren’t fully explained or seemingly emerge from out of nowhere. The final act in particular unfolds aimlessly, as if it were being made up as the filmmaker went along, unsure how to wrap up the story. The rudiments of a gifted new talent are present here, but their assemblage in this vehicle largely misses the mark. Here’s hoping the next effort is a better one.