Skip to content
Home/‘Tales of Tomorrow’ (‘Contos do Amanhã’)

‘Tales of Tomorrow’ (‘Contos do Amanhã’) 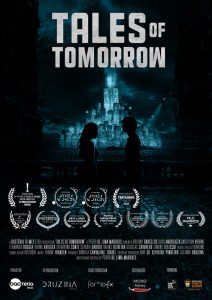 “Tales of Tomorrow” (“Contos do Amanhã”)

It’s quite a disappointment when a film with an intriguing premise falls on its face in its execution. So it is with this Brazilian sci-fi adventure about a world on the brink of collapse after a series of catastrophes seeking to save itself with the aid of a teenage computer whiz living in 1999. Regrettably, writer-director Pedro de Lima Marques, in his feature film debut, drops the ball in bringing the story to life. The picture’s future sequences are stylishly presented but couched in cryptic dialogue and unexplained events, leaving so much untold that it’s difficult to ascertain exactly what’s going on. Meanwhile, the film’s forays into the past are weighed down by so much inconsequential, repetitive, extraneous and uninvolving material, buoyed by glacial pacing, that it won’t be long before viewers aren’t likely to care much about what happens. And, when these parallel story tracks finally merge, the attempt at explaining their previously unidentified connections fails miserably, falling back on an array of empty, half-baked metaphysical notions that essentially say nothing and rely on a lot of meaningless double talk. By that point, not even a bevy of polished special effects in the film’s underwhelming climax can save this off-the-rails production from slipping into the abyss of totally forgettable science fiction vehicles. I said it up top, and I’ll say it again – what a disappointment.