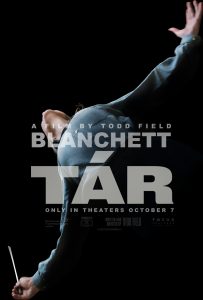 Unquestionably one of the most unusual offerings of 2022. And, while much of writer-director Todd Field’s latest – his first film in 16 years – succeeds, there are sequences that could definitely use some work, especially at the outset of this somewhat overlong release. This tale of a brilliant, compulsively driven maestra manages to muster its share of dramatic tension and artistic exuberance, but it also leaves its share of loose ends and unclear motivations, making viewers wonder why events unfold as they do (and even more so about why they should care). It’s a body of work that also leaves open the question of whether this is innately a grand tragedy of comeuppance or a tongue-in-cheek exercise in pretention (again, something more to make audiences wonder why they should care). But perhaps the biggest irritant is the picture’s annoying and tiresome tendency (especially early on as the story is establishing itself) to break into protracted, insular discussions about classical music (and the business of it) that sound more like classroom lectures (or professional gossip) than bona fide credible dialogue. Much to its credit, the film features what is perhaps one of Cate Blanchett’s finest screen performances, a finely tuned ramping up of the escalating pathos the further one gets into the narrative and a positively superb classical music score. Is that enough to save the film, though? I’d provisionally say yes, but, if none of this sounds like it would appeal to you, I’d recommend that you give this one a pass and rent one of the protagonist’s many other fine releases instead.