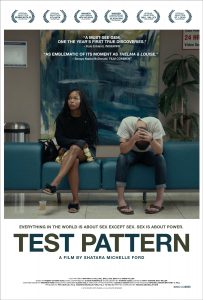 Sexual assault is a subject that carries important implications on multiple fronts, and it deserves serious treatment when committed to film. Unfortunately, writer-director Shatara Michelle Ford’s debut feature leaves much to be desired in its handling of the topic. While the picture’s heart may be in the right place – a look at the often-frustrating handling involved in collecting forensic evidence in a rape case – its execution of the story often misses the mark. Some issues and events are needlessly stretched out, while others receive short shrift and others still are addressed somewhat flippantly (a genuinely surprising approach in a story like this). I’m certainly not suggesting that the film lacks merit, but it surely could have been constructed more effectively than how it comes across in its current version. Admittedly, this release features some fine performances and intriguing cinematography, but the overall package is uneven, weakening whatever insights the film has to offer. Considerable retooling is necessary to fulfill this offering’s potential and to convey the message of a subject that deserves better treatment.