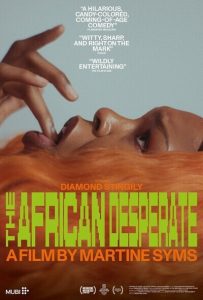 Lampooning a supposedly revered sacred cow often provides great fodder for insightful satire and raucous comedy. And, at the outset of writer-director Martine Syms’s debut feature, the filmmaker seems to be off to an auspicious start. In this tale of an African-American woman (Diamond Stingily) seeking to complete her MFA degree at a prestigious private college in rural Upstate New York, the picture launches with a wicked skewering of the pretention underlying university-level fine arts education. The dumbfounding stream of consciousness pseudointellectual observations of the degree candidate’s ivory tower professors – who end up quibbling amongst themselves during their student’s dissertation defense – is incisively hilarious, exposing these alleged erudite blowhards as the supercilious, superficial frauds they truly are. Unfortunately, despite this brilliantly crafted initial setup, the picture woefully declines from there, not really knowing where it wants to go. Much of the ensuing narrative is devoted to a drug-infused celebration in honor of the new master’s degree holder, but it’s so rambling in nature that it becomes irrelevant and uninteresting. That problem is further compounded by the picture’s uneven, ill-defined development of the protagonist’s character, leaving audiences often wondering exactly who she is. Indeed, given the foregoing, one can’t help but speculate, why does this “story” even exist? Admittedly it’s presented with some inventive cinematography and a lively, colorful production design, with a capable performance by Stingily. But, as this offering limps toward its lame, unimpressive conclusion, it grows ever more tiresome and tedious, a huge drop-off from its superb start. Maybe it’s because that’s all this release had going for it to begin with, and what followed was merely an attempt to stretch out that concept into a feature-length production. That’s too bad because, with further development, this might have been a sidesplitting romp. As it stands now, however, it’s little more than a great opening sketch followed by a lot of would-be comedic flotsam.