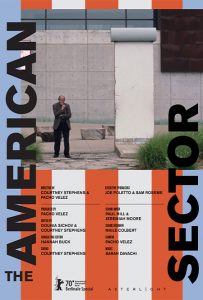 This simple, straightforward, no-nonsense visual essay catalogs many of the US locations of sections of the now-dismantled Berlin Wall. Presented with minimal dialogue and background music, the film shows the various American venues where pieces of this hotly contested Cold War symbol have ended up. While some of the locales are obvious (museums, presidential libraries, parks, corporate headquarters, private collections), others are not, including the exterior grounds of a family-owned restaurant, a theme park, unincorporated lands and even a Chicago metro station. The curators of several of these landmarks offer their insights into the meaning of the wall segments, as well as their significance at a time when plans for another new wall are being put into a place in a land that claims to champion democracy and freedom from restriction, qualities that its East German predecessor sought to curtail. At a breezy-paced economical 68-minute runtime, directors Courtney Stephens and Pacho Velez have assembled a thought-provoking, visually appealing offering that gives us much to contemplate – and not just the wall’s place in history.