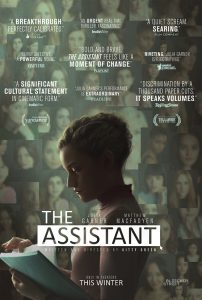 This tale of an entry-level movie company production assistant who’s witness to questionable behavior by her boss and considers blowing the whistle fizzles when it should sizzle. The message may be important, and Julia Garner’s lead performance may be reasonably compelling, but the film itself leaves much to be desired. Instead of offering new insight into a troubling industry problem (and any semblance of hope for the future), writer-director Kitty Green’s debut narrative feature stretches credibility by presenting an allegedly savvy protagonist who displays an astoundingly unbelievable degree of naïvete. What’s more, the supposedly “nuanced” evidence of the transgressions is so painfully obvious that any attempt at subtlety is obliterated. On top of all this, the film’s glacial pacing and inclusion of far too much extraneous padding make this an excruciatingly slow watch, even with its scant 1:27:00 runtime. This multiple Independent Spirit Award nominee has been vastly oversold in its restatement of the obvious with no adequate remedies for addressing its core issue. Watch “Bombshell” (2019) instead.