‘The Berrigans: Devout and Dangerous’ 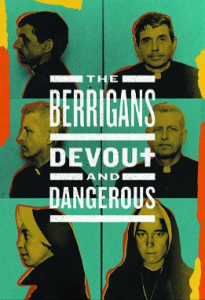 “The Berrigans: Devout and Dangerous”

In times of war and great social challenges, it can be difficult to remain devoted to one’s principles – no matter how strongly we feel about them – when prevailing circumstances threaten to curtail our freedoms and our ability to express our feelings about them. Yet there are courageous, unflappable individuals who refuse to let such conditions stop them, as evidenced by the protests led by activists Philip and Daniel Berrigan and Elizabeth McAllister. In this superb documentary about the lives of these three heroic figures (two priests and a nun who walked their talk when it came to their Catholic values), director Susan Hagedorn chronicles the efforts of these anti-war advocates who destroyed draft records as a means of protesting US involvement in the Vietnam War, as well as their activities in the civil rights movement and the early days of the AIDS crisis. They paid dearly for their actions, spending considerable time in prison, but they could not ignore their conscience in carrying out these acts of deliberate defiance. Through a wealth of archive materials and contemporary interviews with family members and those who worked with them (such as actor Martin Sheen and Pentagon Papers whistleblower Daniel Ellsberg), these three activists brilliantly come to life, both as advocates for their causes and as compassionate, committed individuals, all captured in a highly personal way. This material is supplemented with voiceover narrations of the brothers’ writings read by Liam Neeson and Bill Pullman, adding an intimate and thoughtful dimension to their portrayals. We owe much to these virtuous champions, and this eminently moving film makes that abundantly clear.