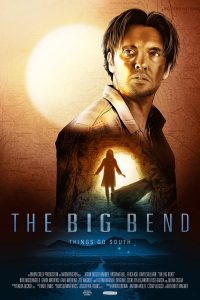 We all reach significant turning points in our lives, and we’re not always prepared for how to deal with them. Such is the case for four old friends, the Talbotts and the Prices, two married couples experiencing a variety of issues that threaten the future of their families and relationships. They meet for a reunion at the Talbotts’ desert homestead on the edge of Big Bend National Park in South Texas, a gathering meant to provide a respite from their problems and an opportunity to enjoy the surrounding gorgeous scenery. But, as the couples find out, they can’t escape their troubles completely, that those lingering turning points stubbornly persist, symbolically looming over them like the geography of the region’s landscape. And, to confound matters even further, additional new challenges arise that make their time together even more complicated. Unfortunately, as writer-director Brett Wagner’s second feature plays out, the complications in this comedy-drama grow a little too thick and far too numerous for the picture’s own good. Too many threads run through the narrative, and they don’t always seem to head in any kind of readily identifiable direction – that is, until the movie’s second half, when things finally begin to congeal a bit more coherently. But, even with that, just when viewers might think that all is said and done, the picture veers off in new directions yet again. The result is a project that frequently feels directionless, despite its fine performances, gorgeous cinematography, moments of inspired comedy and a handful of well-constructed second-half sequences. Yet these attributes aren’t enough to yield a satisfying whole. That’s disappointing, given that it seems as though the makings of a truly engaging film are present here. However, the picture’s failure to overcome its meandering tendencies and the filmmaker’s apparent reluctance to “kill his darlings” keep the project from reaching its potential, especially when it comes to addressing something as important as how to cope with life’s turning points.