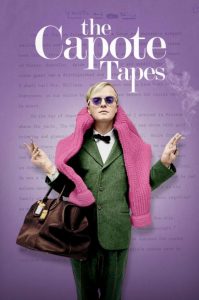 Flamboyant, openly gay author Truman Capote may not have been especially prolific, but he wrote several noteworthy, well-respected works. However, when excerpts of what was supposed to be his crowning achievement – the novel Answered Prayers about the dirty little secrets of New York high society based on the lives of a number of his “friends” – he became a pariah of sorts, losing contact with many of those close to him and triggering a speedy downward spiral in his health and well-being. In this new documentary, excerpts of recorded interviews with many of his friends and colleagues and new interviews with those who knew him and studied his work shed light on the enigmatic icon, his life and his writing, particularly with regard to his final and unfinished work. Included are archive segments featuring Lauren Bacall, Candice Bergen, George Plimpton, Norman Mailer, Lee Radziwill, Harper Lee, William F. Buckley and Capote’s partner Jack Dunphy, along with new conversations with author Jay McInerney, journalist Sally Quinn, Vogue editor André Leon Talley and talk show host Dick Cavett, among others. Director Ebs Burnough’s debut feature presents a captivating look at a talented, troubled and towering figure.