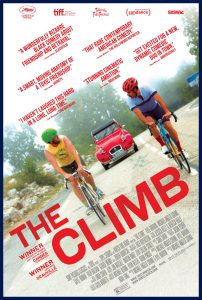 Friendship can be a beautiful thing. Sometimes it can be painfully exasperating. And some other times it can be both, as this offbeat indie comedy shows in its exploration of a seemingly mismatched duo of longtime pals. Admittedly, this quirky exercise can sometimes be a little too analytical for its own good, resulting in some uneven pacing and overly talky sequences. However, when its inventive humor works, it’s truly inspired, unlike anything viewers have probably ever seen. I just wish there were more of it. When writers Michael Angelo Covino and Kyle Marvin come up with ways to make a cycling trip, a funeral and an ice fishing expedition funny, you know these guys are onto something. It would have been great if they could have sustained such inventive lunacy more consistently, but I’ll gladly take what they have given us, considering that their bits brought out bigger laughs from me than from virtually any other comedy I have seen in some time. This duo is off to a great start with their debut feature, and I look forward to whatever they come up with next.