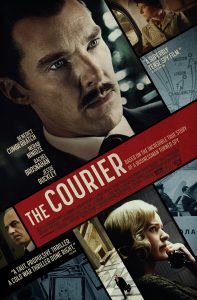 Though somewhat slow to start, this Cold War espionage thriller set in the midst of the Cuban Missile Crisis picks up steam the further one gets into it, especially in a final act that tugs at the heartstrings surprisingly well in the wake of the implications involved. Director Dominic Cooke’s latest, a capably made offering in virtually every regard, tells the fact-based story of a British businessman recruited by the CIA and MI6 to transport secrets from a Russian operative to the West, a task he’s reluctant to take on initially but actually becomes quite proficient at as the stakes are continually upped and larger threats loom. Benedict Cumberbatch’s superb lead performance is probably some of the best work he’s ever done, especially in the picture’s home stretch. However, despite these many fine attributes, the film never feels quite as compelling as it probably could have in light of the high-stakes subject matter (except, of course, in the movie’s end run sequence). While “The Courier” certainly makes a decent viewing option, especially when it delivers elements not expected out of this genre, its ability to wow audiences is never quite realized to the extent it otherwise might have.