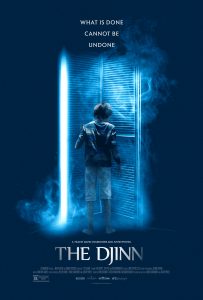 One of the cardinal sins of filmmaking is predictability, a transgression this alleged horror film violates multiple times during its 81-minute runtime (which seems much longer while watching it). When a young boy stumbles upon a copy of the Book of Shadows in his new home, he uses it to summon a djinn (essentially a devious genie) to grant his most cherished wish, a request that comes at a cost. Directors David Charbonier and Justin Powell then proceed to spin a cat-and-mouse yarn riddled with virtually every horror film cliché ever imagined, with alleged scares coming precisely on cue in exactly the foreseen forms from there to the end of the film. Despite some atmospheric cinematography and an occasionally intriguing production design, the picture suffers from numerous narrative inconsistencies, as well as unexplained plot devices, glacial pacing and, of course, the aforementioned predictability. Nothing frightening here, except, of course, for the money you’ll be out if you decide to plunk down hard-earned funds to watch this cinematic disappointment.