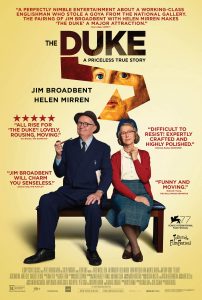 Being an idealist is a noble but often-lonely, often-misunderstood pursuit, a mantle that can easily leave one isolated or even persecuted. However, the intents driving such individuals frequently come from an overlooked place of goodness and fairness. Such is the case in this fact-based comedy-drama about 60-year-old wannabe British playwright/political activist Kempton Bunton, who, in 1961, became embroiled in the theft of a painting of the Duke of Wellington by Francisco Goya from London’s National Gallery. It was an act aimed at protesting the government’s expenditure of £140,000 that he believed could have been put to better use for charitable purposes, namely, the funding of state-required television licenses for lonely, aging veterans and pensioners. However, as the film reveals, this scenario was not entirely what it seemed to be, but it nevertheless provided an opportunity for Bunton’s cause to be brought to light, revealing the altruism that drove him. Director Roger Michell’s whimsical offering thus shines a bright light on the importance of being kind, compassionate and civil, a message that deserves greater importance and attention in days like these. Admittedly, the film probably would have worked better if it played off the humor element more than it does, particularly in the first hour (and especially given the available pool of talent in this cast, most notably Jim Broadbent as Bunton and Helen Mirren as the protagonist’s put-upon wife). But the picture redeems itself well the further viewers get into it, presenting a feel good message that’s genuine, heartfelt and in need of being heard. Give this one a little time to develop, and you’ll be richly rewarded by film’s end.