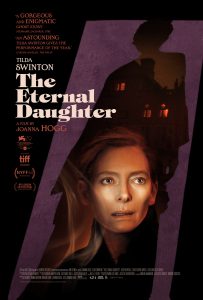 One effective way to tell a tale of suspense is to employ the atmospheric slowburn approach, one that quietly but chillingly sizzles as it leads up to what is eventually (and supposedly) a startling revelation. However, writer-director Joanna Hogg’s attempt at pulling this off in her latest offering falls short, protractedly smoldering but never really catching fire. When a middle-aged English filmmaker and her aging mother (dual roles played by Tilda Swinton) pay a hoped-for nostalgic visit to a vintage country hotel that was once their extended family’s manor house, they set their sights on their stay giving them a chance to relive fond memories and to resolve certain aspects of their complex, sometimes-distant relationship (an irony given the devoted daughter’s earnest attempt at being a loving, dutiful caretaker). But, almost from the moment they arrive, things don’t play out as anticipated; events unfold with a surreal, unfathomable awkwardness in a setting befitting a gothic ghost story. So what’s going on here? That’s what the film seeks to explain. Unfortunately, there’s not a whole lot to tell here, the story ultimately being more tedious than suspenseful, frequently relying on astonished reaction shots to things that mysteriously go bump in the night to carry the story forward. And, when “the big reveal” finally comes, it emerges more with a whimper than a bang (especially since it’s not particularly difficult to figure out what’s coming anyway). While the film is stylistic to a fault in terms of skillfully creating a suitable ambiance, the accompanying narrative is rather anemic by comparison. It’s almost as if the storyteller is spinning a vague yarn, one told with kid gloves, a nagging frustration for those expecting something with more of a bite to it. While there’s a definite purpose behind this, given the picture’s attempt at exploring elements of the mother-daughter relationship typically not addressed in films like this, this set of restrained attributes nevertheless inhibits this offering from ever developing much of an edge to it (yawn). To the film’s credit, it features yet another fine performance by Swinton, but it’s regrettable that she’s not given much to work with. And, even with its comparatively short 1:36:00 runtime, the picture somehow manages to seem like it’s far longer. Indeed, in this case, “eternal” is something applicable to more than just the wording of its title.