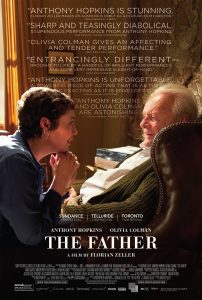 Despite a stellar performance by Anthony Hopkins and director Florian Zeller’s creative and unconventional treatment of his movie’s subject matter, this look at the progression of dementia as seen from the inside tends to become somewhat repetitive over time, prompting viewers to wonder where it’s all headed. That aside, however, the most likely conclusion to come out of such speculation is not, in fact, at all difficult to decipher before its somewhat uneventful arrival. The film takes a little too long to reach that point, providing audiences with a payoff that’s not as unexpected to see coming as the filmmaker seems to think it is. To be sure, the emotions the picture stirs are indeed genuine, but the process through which they’re generated could have used less redundancy, despite the twists and turns that arise throughout the course of the film. The picture is indeed a solid effort but not one that’s as outstanding as it’s being made out to be.