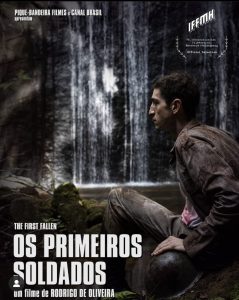 It can be terrifying to know that something is wrong but not know what it is. So it was for many in the LGBTQ+ community in the early ʼ80s with the onset of the AIDS crisis, a disease that didn’t even have a name at the time but was simply referred to as “the gay plague.” In writer-director Rodrigo de Oliveira’s latest, the filmmaker examines this issue from the standpoint of three friends afflicted with the illness in the Brazilian city of Vitória. The first half explores their growing undefined uneasiness, while the second chronicles their struggle once their worst fears are confirmed. Oliveira accomplishes this by employing a variety of storytelling techniques, some of which definitely work better than others. The picture’s second half is undoubtedly the stronger portion of the film, addressing the characters’ anguish in gut-wrenching detail and providing them with a platform for waxing hauntingly philosophically about the symbolic nature of their illness, story elements effectively brought to life by the superb performances of Johnny Massaro, Renata Carvalho and Victor Camilo. It’s unfortunate, however, that all aspects don’t work equally well, especially those in the first half, where the protagonists’ uncertainty about their status is sometimes treated a little too subtly, even cryptically, leaving viewers wondering exactly what’s going on with them. That’s particularly true when metaphorical sequences intrude on the primary narrative, needlessly muddying the waters. Considering the impact this devastating disease has had on the world for four decades, this story represents a significant milestone in the emergence and unfolding of this crisis, a scary time when little was known and the future impact of this scourge could not be foreseen. It’s regrettable, though, that this film doesn’t quite do it justice in those regards as effectively as it might have.