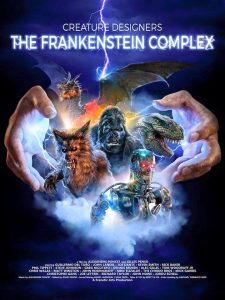 If you’ve ever wondered how all of your favorite sci-fi, fantasy and creature films manifest those marvelous special effects that dazzle you into cinematic ecstasy, this one is for you. Director Gilles Penso’s recently released in-depth 2015 documentary examines the history of special creature effects, from the early works of visionaries like Lon Chaney to the state-of-the-art visuals seen in films like “Avatar,” as well as those used in game-changing pictures like “Star Wars,” “An American Werewolf in London” and “Jurassic Park.” In going behind the scenes, this offering explains the principles and reasoning behind the workings of sophisticated technologies like animatronics and CGI, as well as the elegant simplicity of low-tech tools like puppetry and latex masks, and various combinations of all of the foregoing. Through conversations with special effects artists and directors like John Landis, Joe Dante and Guillermo del Toro, viewers witness how the monsters come to life as characters in their films, taking on an importance that goes beyond just being something visually scary. While this release may be a little overlong and excessively detailed for the casual moviegoer, tech geeks will definitely be in cinematic nirvana, what with all the inside information, film clips and cool interviews with industry professionals. Totally rad, dude.