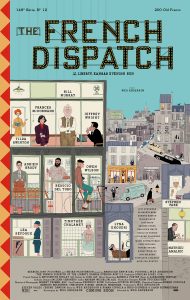 As per his typical form, director Wes Anderson has again delivered a stunningly impressive stylistic offering in every production design detail. And, to his credit, he even manages to serve up a film that is often charming, witty and funny, elements often absent from his pictures in light of his substance-over-style tendencies. But this is still another example of close but no cigar. In this homage to old school foreign correspondent print journalism/reportage, told in a series of vignettes, Anderson gets it right about 50% of the time, despite the movie’s superb technical and artistic accomplishments and its fine performances by a glittering all-star cast whose members obviously had a great time making this picture. It’s a shame, however, that the filmmaker, in his typical manner again here, never quite manages to pull it all together to create a finished product that fires on all cylinders. Diehard fans of the director will no doubt love this release, while the average cinephile will likely come away impressed by its celluloid eye candy and modestly amused for its eccentric, if not always spot-on storytelling. Maybe one day Anderson will live up to his potential, but, based on this outing, he still has yet to do that.