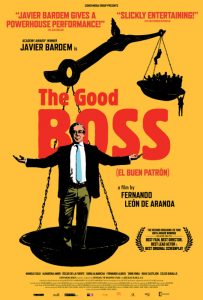 It would appear comforting that there are still companies out there that genuinely care about the welfare of their employees, treating them like members of a big, loving family. And that’s the image that Blanco Scales tries to convey, one that’s placed the organization in the running for a regional business award, one of many such honors it has received over the years. Making this possible is the company’s owner, a kindly paternal sort who seems concerned about the well-being of his staff – that is, insofar as it affects the company’s welfare. This approach, however, often leads to undue meddling in the lives of workers, so much so that the boss will go to almost any lengths to achieve his goals by way of his employees and their families, especially when it comes to reflecting the proper image he’s trying to project, a practice ultimately fraught with troubling complications. Writer-director Fernando León de Aranoa’s latest serves up a biting satire about the business world and the extremes to which businesses will go to present squeaky clean, politically correct portraits of themselves to an easily gullible public, tactfully burying the compromises and questionable tactics they often must do in realizing that goal. This offering is a perfect vehicle for Javier Bardem as the oily protagonist, playing the part with just the right amount of insincerity to be convincing without looking cartoonish, in a role backed by a superb ensemble of supporting characters. It’s regrettable that the picture gets off to a painfully slow start during much of the first hour, but the film more than makes up for this shortcoming in the second half, turning wickedly funny and occasionally disquieting in the second half. Be patient with this one, giving it ample time to develop; you won’t be disappointed with the payoff.