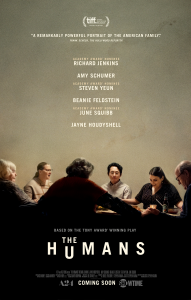 Though somewhat slow to get started and occasionally running aground on narrative sandbars, writer-director Stephen Karam’s debut feature of his own award-winning one-act stage play nevertheless delivers a quietly chilling yet macabrely humorous take on a dysfunctional family’s Thanksgiving celebration. This creepy, slyly sinister comedy-drama about six family members coming to terms with their fears, secrets and often-strained connections delights with surprises and touches of whimsy while simultaneously exploring the darker side of human nature in all its bald-faced, unrepentant ugliness. The superb ensemble of Richard Jenkins, Jayne Houdyshell, Amy Schumer, Beanie Feldstein, Steven Yeun and June Squibb blends seamlessly, providing viewers with a delicately balanced mix of personalities, all finely tuned to interact with and play off of one another. With its often-dark ambiance and ghoulishly enigmatic cinematography, “The Humans” may not be the kind of idealized Rockwell-esque picture one would typically associate with the holidays, but it makes for an intriguing alternative to the sugarcoated fare one typically sees at this time of year while providing more than its share of spooky laughs and incisively comic jabs along the way.