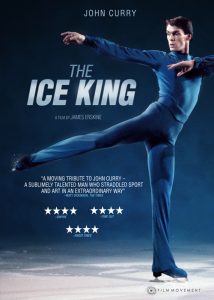 British figure skater John Curry revolutionized a sport – and later an art form – that had long been driven by sheer athleticism rather than inspired artistry. The 1976 Olympic gold medal winner made it acceptable for men to be fluid and expressive in their movements and on-ice choreography, defying longstanding traditions to the contrary. And, once he finished competing, Curry drew on his reputation in establishing an artistic skating troupe fashioned after traditional ballet companies, bringing a flair to ice performances not previously seen at the time. But, for all his artistic and athletic achievements, Curry was also a troubled soul and obsessive perfectionist, frequently depressed and often lonely. As the first openly gay Olympian (a revelation that initially came about from a press report outing rather than from an act of personal disclosure), he experienced a difficult upbringing under a stern father who quashed his ambition to study ballet but who willingly approved skating because it was a “sport,” an issue that followed him throughout his life. Director James Erskine’s superb 2018 documentary comprehensively covers all aspects of Curry’s complicated life and death from AIDS in 1994, incorporating a wealth of rare archive footage and featuring commentary from friends, colleagues, and fellow figure skaters Robin Cousins, Johnny Weir and Dorothy Hamill, as well as past interviews with Curry himself. The film is a fitting tribute to a remarkable talent who left a tremendous legacy as a competitor, as an artist, and, above all, as an individual.