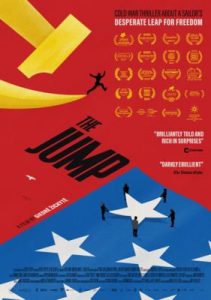 Taking a leap of faith – literally and figuratively – is a truly inspiring act, especially when we believe that doing so will help us fulfill a cherished dream. But what happens when that aspiration doesn’t pan out as planned? That’s what happened in 1970, when Lithuanian seaman Simas Kudirka leapt from his Soviet fishing boat onto the deck of a US Coast Guard vessel in hopes of seeking asylum, a request that was surprisingly denied, setting off both an international incident and a mass wave of indignant protests in the West. The heartbreaking and heartwarming saga he subsequently underwent provides the focus of director Giedre Zickyte’s in-depth documentary about Kudirka’s incredible odyssey. The film not only outlines Kudirka’s remarkable journey, but also presents an up-close profile of a colorful and vibrant individual, one who shows us our lack of appreciation for things that we should be valuing, as well as how to stay vital well on into our senior years. It’s a combination that works quite well, although the final segment loses some of the picture’s steam as it winds down to the final frame. Nonetheless, even though this is a story that has largely gone forgotten, it delivers a message that should never be.