‘The Killing of Two Lovers’ 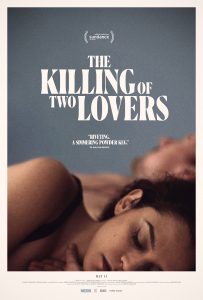 “The Killing of Two Lovers”

When a couple goes through a trial separation with an open approach to dating others, difficulties arise when the spouses see the arrangement differently from one another, leading to tense exchanges, heartbreak and eventually the threat of genuine danger. But, in director Robert Machoian’s latest, things are not always what they seem to be as this chilling and suspenseful tale plays out. The film’s brilliantly orchestrated and executed minimalist treatment, coupled with its expertly crafted atmospheric mood, ethereal soundtrack, stark cinematography and fine performances, combine to make for a taut, gripping story that keeps viewers spellbound, especially when it spins off in unexpected directions. Admittedly, the picture could have benefitted from a little more back story, though that’s more than made up for by the production’s superb character development and many other attributes, a film that shows more than tells in conveying its narrative. This Independent Spirit Award nominee for the competition’s John Cassavettes Award was certainly well deserved, showing cinephiles and the movie industry at large that it is indeed possible to produce great work with meager means.