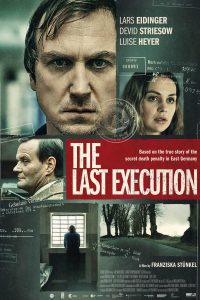 Inspired by the life of Werner Teske, the last person executed in East Germany before the death penalty was abolished, this fictionalized account of his story follows the tragic experience of an ambitious but idealistic and naïve scientist/professor who sacrifices his integrity for the prospect of upward mobility when recruited to work for the Ministry for State Security (Stasi). Having landed a position of enviable comfort by East German standards, the devoted recruit initially complies with what’s asked of him. However, when he’s coerced into activities that he finds personally troubling, he has difficulty following orders, putting him under mounting pressure and enhanced scrutiny as he’s soon railroaded by his own agency. While director Franziska Stünkel’s second narrative feature starts off well as a finely crafted espionage thriller, it begins running out of steam as it switches tracks to explore the psychological aspects of its story, becoming increasingly plodding and riddled with extraneous sequences that could have easily been cut. It’s unfortunate that the intensity with which the film begins isn’t sustained when the protagonist wrestles with his crisis of conscience, a narrative development that one would think would have had the same sizzle potential as what preceded it. There are also plot elements that occasionally stretch credibility, particularly when it comes to the protagonist’s naïvete. As it stands, viewers are left with a film that works well some – but regrettably not all – of the time.