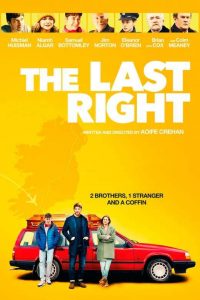 No matter how insurmountable the task may seem, it’s never too late to make amends with separated loved ones, even in those final moments of life together. However, one would hope that we wouldn’t wait that long to make such reconciliations happen, a sweet little piece of heartfelt advice shared in this delightful Irish comedy-drama. When an Irish-born lawyer living in New York learns that his mother has died, he returns home to attend to the funeral arrangements. While on his flight, he meets an older gentleman who’s journeying to Ireland for a similar task, to pay final respects to his recently departed brother with whom he’s been estranged for many years. After striking up a genial conversation, the two passengers realize they share the same last name. Yet, unbeknownst to the younger traveler, his elder counterpart – who has no other relatives of his own – ends up listing his new companion as his next of kin on his passport. That designation proves convenient when he passes away in his sleep during the flight, erroneously saddling his young new friend with responsibility for resolution of his remains – and at the opposite end of Ireland no less. What ensues is a madcap road trip across the Emerald Isle in which the befuddled and mistakenly burdened de facto executor attempts to deliver the corpse to its final resting place in Northern Ireland, a journey weighed down by the reluctant presence of his own estranged (and autistic) younger brother and the accompaniment of an unexpected companion in the guise of an impulsive, flighty funeral home employee who becomes the subject of a potentially budding romance. With a scenario like this, what could possibly go wrong? Well, as events unfold, you name it. Writer-director Aiofe Crehan’s debut feature is a sweet and touching affair with moments of both humor and drama (though, given the irreverent subject matter, it really could have used a little more of the former and a little less of the latter to be more effective, its heartstring-tugging message notwithstanding). In many regards, this offering strikes me as reminiscent of an Irish version of Alexander Payne’s “Nebraska” (2013), though with less of the edgy humor that made that film such a cinematic gem. Nevertheless, those looking for a pleasant, warm, fuzzy movie experience may want to give this one a look, now available for streaming online and on the Showtime cable TV network.