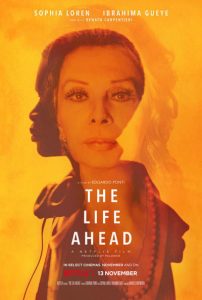 Though occasionally somewhat predictable and formulaic, this touching tale about a Holocaust survivor and former streetwalker who takes in and cares for orphans and other cast-aside children shines brilliantly thanks to its outstanding performances and the palpable chemistry of its superb ensemble cast members. As a streetwise, tough-loving mother figure, veteran actress Sophia Loren (in her first feature film role in 10 years) provides a perfect counterpart to a troubled 12-year-old Senegalese immigrant street child played by newcomer Ibrahima Gueye, helping him find his way and giving him the love, nurturing and support he so desperately needs. Director Edoardo Ponti (Loren’s son) serves up a fine effort in his third feature outing, one worthy of the awards buzz it has been generating, especially for his leading lady’s stellar portrayal. The story here may seem a little familiar at times, but its execution more than makes up for that, with the 87-year-old Loren adding yet another memorable performance to her storied career.