Skip to content
Home/‘The Loneliest Whale: The Search for 52’

‘The Loneliest Whale: The Search for 52’ 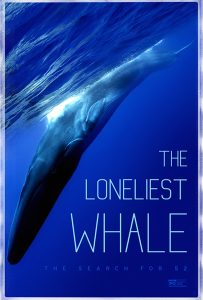 “The Loneliest Whale: The Search for 52”

The search for connection is something that we all understand, not only as a social practice, but also as a personal and collective need. So, when we hear about an individual who is unable to fulfill that requirement, we’re often saddened by this deficiency, regardless of whether this circumstance involves a human or some other creature. Such is the case for a believed-hybrid whale that sings its songs on a unique frequency, making it fundamentally unable to communicate with its peers and causing it to be labeled as the ultimate social outcast. This has thus led to the emergence of a mythology sentimentally celebrated in story and even song, all backed by an abundance of empathy for this loner of the deep, a creature that has come to be known as “the loneliest whale.” The search for this elusive cetacean provides the focus of filmmaker Joshua Zeman’s captivating new documentary, which shares the story of this solitary specimen and the long-shot expedition launched to find it. The film generally tells the tale in a beautifully filmed and engaging manner, though it has unfortunate tendencies to slip off into tangents that are awkwardly introduced and to insert annoying, somewhat self-aggrandizing observations from the director/narrator, intrusions that needlessly impede the flow of the narrative. Nevertheless, this offering also draws a number of relevant and pertinent parallels between the human condition and that of the lonely whale and its kindreds, metaphorical parables that we had all better heed if we hope to save the whales – and ourselves.