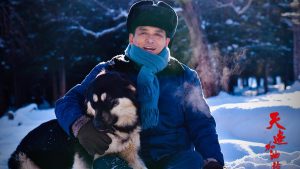 Retirement can be a frightening prospect for many individuals, especially those who have occupied their jobs for a long time and aren’t sure what they’ll do with themselves when such familiarity is absent from their lives. So it is for a gas station manager in a remote Chinese province who serves his community by doing more than just pumping petrol. Can he bear the idea of giving up the sense of impassioned, personalized responsibility that he has cultivated with his constituency over the past 20 years? And what of the young apprentice successor he’s training – can he adequately follow in his predecessor’s footsteps? Those are the questions raised in director Han Wanfeng’s touching comedy-drama about life in the snowy frontier at the base of Tianshan Mountain in China’s Kazakh region. As delightful and heartfelt as the film often is, however, it’s somewhat episodic and predictable at times, along with some elements that seem odd and out of place, such as a Bollywood-inspired musical number featuring a colorful performance of a Kazakh folk song. There is also an issue with the subtitling, which is quite small, full of typos and frequently moves by at a rapid-fire pace. Nevertheless, despite these shortcomings, this gorgeously filmed offering is generally enjoyable, the kind of picture that will definitely tug at the heartstrings and bring more than a few smiles to one’s face.