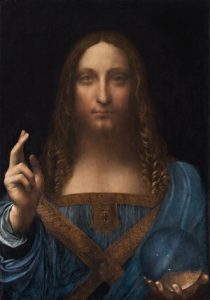 When a missing masterpiece allegedly surfaces, there’s tremendous celebration and supreme doubt. Is it legitimate or phony? That’s the question that was raised when Leonardo da Vinci’s believed-lost Salvatore Mundi surfaced, raising the possibility that a work by one of the world’s masters had been resurrected. But there was considerable skepticism about its authenticity. And, once it was believed to be genuine, a firestorm over its future ownership arose, one that was riddled with shady monetary considerations and even concerns related to geopolitical capital. Such are the dynamics of director Andreas Koefoed’s superb documentary chronicling the events associated with this artistic find, told in the form of a mystery/thriller with intriguing twists and turns, along with an ante that’s continually upped and an auction price that fetched the highest amount ever paid for a work of art. Lovers of fine art and cinematic intrigue will no doubt enjoy this engaging and thoroughly entertaining work.